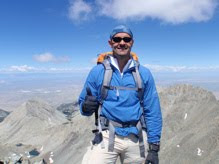 July 10, 2010: I was given the opportunity to help a friend and colleague fulfill a 30-year dream. After having grown up in Colorado, Dr. Mark Branine used to drive past 14,345' Mt. Blanca in the Sangre de Cristo mountain range, wondering what it would be like to stand atop its summit. On July 9, 2010 we set off to do just that. After ascending ~3500' to our camp situated next to picturesque Como Lake we rested up for next day's summit bid. Although not an alpine start as on Everest, we managed to leave camp at 7:25 a.m., weaving away up and around Bear Lake and Crater Lake, the latter which sits at the foot of Blanca. Four hours later and after some Class 2-3 scrambling we found ourselves with amazing 360 degree views from atop the peak considered to be holy ground by native american indians. We could see Pikes Peak to the north near Colorado Springs. Over my shoulder in the photo is Ellingwood Point, another 14ner.
I have to admit, although Blanca is just under half the height of Everest, it posed a formidable challenge. It was great to get my mountain legs back under me. I couldn't have been more happy for Mark in accomplishing a dream. I appreciated the opportunity to be there for that moment. What a great smile on my friend's face! 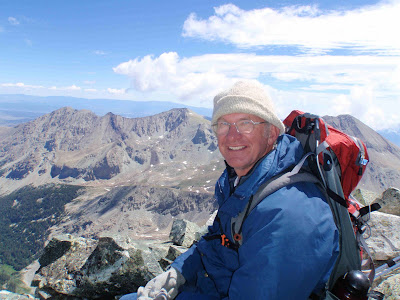 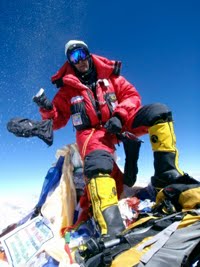